What Is Happening To Our Democracy? 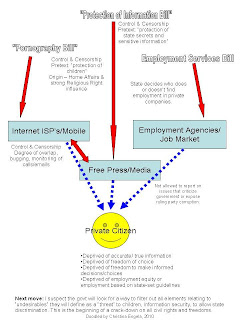 I doodled about the matter surrounding the government's current assault on South Africa's democracy on my white board last night, and found what I'd come up with rather thought provoking, so I thought I would build it into a Powerpoint slide and share it with you.
You see, currently we are facing the brunt of a broad-based attack on the freedom of the press as well as the civil rights of the ordinary citizen - in the form of the Protection of Information Bill, the "Pornography Bill" being pushed by the Dept of Home Affairs - and the newly newsworthy "Employment Services Bill" - all of which would turn democracy on its head and steer our country on a course which could only lead us to disaster.
Feel free to look it over, I think it says more than a 1000 page article could at this point. After all, it basically says what I've been shouting and waving my arms about the past 3 years. Feel free to pass it on and publish it if you will. Just get is out and warn people to get off their apathetic rear ends and take an interest in their own well being.
Both the "Protection of Information" Bill and "Porn Bill" (although I've been led to believe this is still only a three page conceptual document at this stage) could lead to far more invasive laws and practices than those thinking they will be "protecting children" and "sensitive information" may expect. Who knows what some elements would deem necessary to "protect children" or the "security of information"? Wire tapping? How private will your phone calls be under such a law? How about reading people's emails? ISP's would have to install censoring software as used in China to block IP adresses, or to block content - will they be able to read or censor your outgoing emails as well? It's very clear to me that there would be some degree of overlap between these two Bills, justifying the two-way arrow I placed between them, covering a wide scope of things that the increasingly paranoid, power hungry government-slash-ruling party would find interesting.

The newly elected president of the UN General Assembly has called homosexuality "unacceptable" for his own personal religious reasons. How could such a man with such a negative anti-human rights bias be elected to such a post with such hefty human rights responsibilities? What does this bode for the future of human rights regarding the UN? How will this effect the many rights battles in the UN for women and the pink community around the world - especially in areas directly affected by human rights abuses specifically directed against the pink community?

It reminds me of the fact that our wonderfully diverse country - which the preamble to the ACDP Facebook groups always remind me of - refused to sign the UN Declaration to Decriminalize Homosexuality last year. Hmm. Apparently they cited having "principles" for not signing. The USA under conservative anti-gay Republican Bush also refused to sign, but changed its mind as soon as the Obama administration came in. We are still eagerly awaiting a South African reconsideration, but I wouldn't suggest anyone hold their breath - especially this bigot who clearly shouldn't be working in such a high UN post - he should be sitting back home in his village, sucking on a hubbly-bubbly surrounded by his harem of slaves, feeling all patriarchal.