Gun Crime And The Scourge Of Pink Dinosaurs

Last night I read a news article on Pinknews about some bright spark who has claimed in a press release that there is a direct link between the gay rights movement and gun crime.

Gay rights are responsible for gun crime?
Huh?
Apparently this man, a certain Robert Peters - called a "morality campaigner" - is the president of Morality in Media, an organization founded in the early 1960's to "combat pornography". Apparently in its latest crusades it has tried to ban "Cosmopolitan" magazine from store shelves and started (yet another) frivilous 'wear-a-ribbon-for...' campaign against pornography. I'm sorry, but that is just sooo nineties. If this keeps up, bored conservative housewives will have different ribbons for every day of the week.
My, my - what a worthwhile calling, truly noble. Save the endangered "Moral-osaurus", people - it is dying out! Where can I buy a ticket? I want to watch. Get real, folks.

All arguments aside about whether being gay is a sin or not - what about those Christians who take it upon themselves to persecute gay people?
We could debate another year, and for another year people who call themselves Christians and who yet hate gay and trans people could reject all evidence to show gay and trans people are as natural as heterosexual people, as well as rejecting all reasonable religious alternatives to the choice some make to hate or to love us in the name of the same God we also love and who also loves us. But let us put that aside for a moment, and narrow it down to response.
How do you as Christians respond to other people?

How many people have died since the dawn of humankind?  Millions? Billions?  Hundreds of billions?   And of those people who have passed into the great hereafter, have any of them EVER returned to this life to tell us of what awaits the living on the other side?   No?  I don't know anybody who ever died and came back to say, "you know, Tina - the afterlife is pretty cool - I just sat around and ate peeled grapes all day and bantered with God - but I thought it was so cool I should come back and tell you about it."  Like I say, I don't know anybody like that.  Do you?
Does ANYBODY?
What we have is books, written by a bunch of nameless, faceless people thousands of years ago who decided to sit down and write about what they thought life was all about - and no, it wasn't the number "42" either.  No, it was a lot more entertaining than that.  They wrote about gods who supposedly laid down laws (or was it the authors themselves - how will we EVER know?) and demanded blood and animal sacrifice in order to keep in the "good books" of these deities.  And today we have people who quote these works of unprovable potential fiction as "gospel truth" - pardon the pun - and even oppress and persecute other people in the name of these said documents.

Apparently the November issue of Seventeen magazine has a transphobic article in it so people have started a letter campaign about it. We're way too old to be reading Seventeen magazine so we didn't notice the original article and the campaign has already been going on for a few weeks... but think this issue is important enough to be passed on.

Apparently the November issue featured a story entitled "My BOYFRIEND turned out to be a GIRL!"

(You can check out the full article at the Facebook event page here.)

Rather than use this opportunity to educate readers about transgender issues, it never once even uses any terminology (well, unless you consider the slur "he-she") but instead furthers the common transphobic assumption that someone who's gender does not match their sex assigned at birth is a deceptive liar and even compares them to perverts, drug addicts, and older dads trying to get someone young w/o disclosing their parental/age status.

Beware the Sodomites want to recruit you!

My jaw once again dropped in disbelief when I recently listened to an audio clip of the rantings of a radical Church leader that a friend forwarded to me.

Mokgadi Caster Semenya (South African middle-distance runner and world champion) has been the centre of controversy the last few weeks. 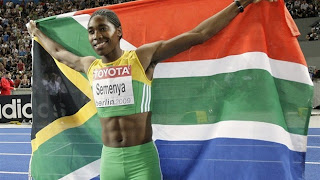 GLBT and Friends at Daily Kos

Our family just returned from an Arkansas the Ozark Foothills wedding of my nephew Daniel and his Bride, Renee.

Traditional Marriage in Arkansas?  Othniel, why would you and austex54 even go to such an event?  Why would you risk even placing a foot across State Line Road in Texarkana?  Well even the Model T and the TI computers found their way to the Ozarks.

Our Youth are reworking it.  Come with us up to those Arkansas Hills and sit a spell, and just watch.  You will really like what you see.

And if per chance you spot The Church Lady fleeing the scene, have pity.  The Times They Are A Changin' a bit too fast for her.  She was a bit discombobulated when Zane told her he did not want her in his pants.