Why you should fight for Civil Rights!

“All, too, will bear in mind this sacred principle, that though the will of the majority is in all cases to prevail, that will, to be rightful, must be reasonable; that the minority possess their equal rights, which equal laws must protect, and to violate would be oppression.”

If you have any questions, comments, or concerns please feel free to email me at TheLesbianGuru@Gmail.com with ExaminerQ as the title or you can follow me on my Blog http://TheLesbianGuru.com! Or  just Join The Lesbian Revolution of Health & Love on http://Twitter.com/TheLesbianGuru or http://Facebook.com/TheFemmeGuru.

To All The Homophobes - by comedian Lee Camp

Here's a modest proposal to all the homophobes out there. 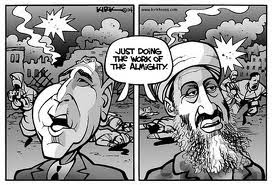 It seems that some people just know how to make a lasting impression. I suppose you could say they might have been reading a dog-eared copy of "How to make friends and influence people", or might have, if it was available in their local religious book store, with suitable recommendations. In fact, some people will read or believe any old thing, as long as it is sold from such places, preferably with strong recommendations from folks like James Dobson or Erroll Naidoo, and assurances that it won't "corrupt" their minds, faith or threaten their families by actually causing them to think.
Last night I went to church. For those of you who know I am an agnostic, you might well be correct in wondering what I would be doing there. In fact I'm pretty sure I'm wondering what I was doing there. Well, wonder no more.
I took my mom there last night, because of her health and her age and I went in with her because she didn't want to go in alone, which is pretty understandable. I'm pretty sure she thinks she's doing some good by twisting my rubber arm to sit next to her for that hour and a half, although I have to wonder if I will be able to endure yet another session like that any time soon.
Now let me tell you about this church I went to with Mom last night. It's a church I attended for years and years, since I was 8 until recently, when I decided I was an agnostic and didn't really feel like going anymore just to put a pretty face on and flutter my pretty eyelashes at the cute guys or girls I saw there. In fact, this church is possibly the only church I feel comfortable going to, because quite honestly it is the only church I know in my city that doesn't preach judgment and persecution of any particular minority group - especially any I happen to be part of. I could be wrong, but to my knowledge there aren't any others here. In fact some churches in my city openly reject people for being gay or for being trans - and one even goes so far as to fund groups in Uganda that advocate state-sponsored genocide of the Pink Community. Shame on them. What would Jesus do? Or should I ask, who would Jesus kill?

Anti-LGBT Hatred from the Pulpit in "Faith of the Abomination"

Faith of the Abomination is an independent documentary film created in Austin, TX about the experiences of a lesbian couple who went undercover as a heterosexual couple inside an Evangelical Organization.

Faith of the Abomination is the story of two Evangelical lesbian women who were promised inclusion in the church, only to be thwarted at every turn. Feeling lonely and frustrated, they decided to change their outside package and joined the Evangelical Organization as man and woman. They were accepted immediately and soon became members of the church's inner circle. However, what they found there strayed far from the teachings of Jesus...

Jay Smooth: What people mean when they say "sensitive"

Jay Smooth helps us decipher the double-speak of hate and fear mongers in his latest Giant Word episode.

Freedom, Rape, Lesbian, Punishment… just words right? Just words lined up. However words have power, even in ancient Kabbalah text they shared that words are the recipe of what they depict and evoke.

So if I take these four words and put them together in a sentence, “Lesbians have no Freedom in some countries because they are Raped and Punished for who they are.”  Now that is a lot less innocent, and now my words, simple on their own have changed the page they first were sounded upon.

Growing up in South Africa was not easy, not for anyone but least of all for women.  We are seen as property and in the African culture, as something to trade with another family for gifts and hopefully for grand children that will take care of you one day.

I grew up as a middle class white foreigner in a country struggling for independence and freedom, mixed with hatred and anger; none was seen more then amongst the different South African tribes.  There was violence towards each others differences in political views, often the whole suffered for the few that had little tolerance.

I often tell people who ask me to explain to them the violence, especially after they come to know that my mother was murdered there, that when you have lived in utter poverty all your life and have seen your world through a pinhole that shows nightmares some of us will gratefully never know, you lose that sense of empathy. In desolation you lose your humanity.  When everything has been taken away, and what you are left with is little hope, anger is the emotional volcanic explosion that takes over your mind.

It saddens me, as I was once in love with the country I grew up in, but it has ravaged my soul and today after I watched the video, E 60 Corrective Rape it has left me empty again.

Donna M. Hughes is lying to you about sex and slavery.

Donna M. Hughes has a message for you: Kinky sex is sex trafficking.

It is a lie.  She may or may not mean to lie to you, but it is a lie because it is not true.

There are a faulty number of assumptions here, all of which are pure conjecture.

First, that she is authorized to speak categorically, on behalf of the human race on issues of what is and is not healthy sexual behavior.  I don't care what her definition of proper sex nor improper sex is.  Frankly, I don't have any interest.  It does not affect me nor anyone I know.

Second, she conflates trafficking with slavery.  Trafficking is a broader and perhaps more modern word for slavery.  Let's be clear, slavery is slavery.  Forced labor of any kind is slavery.  Slavery exists today and people are forced to do many things as slaves.  Manual labor, warfare, sex, domestic labor and many other things.  As words go, however the two words are different.  Slavery is understood clearly.  Trafficking is not only less well understood or less often heard, but it is used in many contexts. 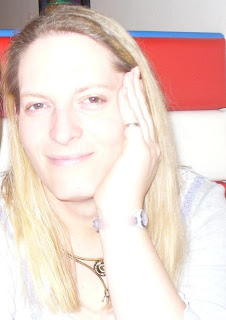 Over the past few months a war of words has been raging over the activities of "ex-gay" groups in the USA and around the world wherever they have set up affiliates or branches of their own - including in my own country, South Africa. The "ex-gay" movement operates on a purely religious basis and claims solely out of a misinterpretation of religious dogma, that gay (or trans) people can and should either deny their nature - or "change". They claim all sorts of "studies" and "proof" exist to support their theories, but the truth is that no such evidence exists - and that every reputable medical, scientific and psychological institute, authority or body asserts that "conversion therapy" - IE attempts to change sexual orientation by "ex-gay" industry, is dangerous, risky and harmful to those it affects.
All this has prompted me to look back - and inwards, to a time when I was struggling for self-acceptance, and to find my own identity.
The very first thought I can remember which indicated to me that there was something "different" or "abnormal" about me (those are increasingly dangerous and stigmatized words these days) was when I was three years old and sitting on a potty, looking at my genitalia and thinking "that shouldn't be there". I am sure it is no coincidence that many of my best ideas since then have also come to me under similar circumstances. *Grin*

Equality - A Goalpost On Wheels For Every Occasion

In December last year, a man was thrown off a moving commuter train in Johannesburg.  The Metro security didn't come to his aid - because the two men who threw him of the train were Metro security guards - supposedly there to protect the passengers from just this sort of thing.  His crime?  Carrying a woman's handbag and behaving in a feminine manner.  To compound this insult to his person and dignity, when he tried to report the incident at a police station, the policemen refused to take his statement or lay a charge - and chased him away.
A few weeks ago, a transgender woman reported being assaulted in the street by a man who hurled abuse (and a soft drink can) at her for being transsexual.  And this for just daring to walk past him in the street while being transgender! Police refused to take her statement when she wanted to report the incident or to lay a charge of common assault.
Last Friday night a man was accosted by four other men while walking home who called out obscenities and threw small stones at him from behind, striking him on the back.  When he stopped to confront them, they taunted him by saying "what are you going to do about it?"

On October 6, 2009, Rahim Mohammadi was executed in Tabriz, a city in northwest Iran, after being convicted of sexual abuse and rape during sexual relations between males (a homosexual act called Lavat).

According to Rahim’s lawyer (here), Mr. Mohammad Mostafayi, there was not enough evidence presented to the court to prove such accusations; the court nevertheless decided that once a person is convicted of Lavat, he must be executed.  Mostafayi, who had not been informed of the court’s decision once it was handed down - and was only contacted after his client Rahim had been executed - wrote a letter of further explanation to the authorities.

"Rahim Mohammadi was first arrested for blackmail in June 2008; over the years, due to financial problems, he had used his wife to seduce men, inviting them to their house in order for them to have sex with her.  He would record the encounters on tape and use these tapes to blackmail them.  There was no witness or evidence to prove that Rahim had committed a homosexual act; a complainant who had claimed that he’d been raped by Rahim withdrew the charges," says Mostafayi.  In Iran, in the case of an accusation of Lavat (based on the Islamic punishment code stated here), even if there are no witnesses or evidence, the judge can decide at his own discretion to condemn the accused.