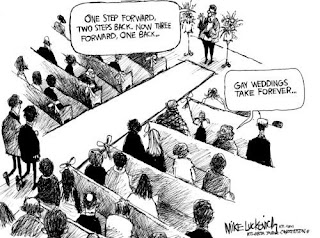 Recently I read a few articles that covered the Marriage Equality victory in California, and felt I had to comment on the issue. Marriage is still a bone of serious contention for our community internationally. We here in South Africa still have hate-groups intent on challenging the legality of marriage equality - once they have finished lynching freedom of the press and ripping the guts out of the Constitution, of course.
Reading the comments by the presiding judge in this case was one of those "yes!" air-punching moments for me, in which the airy-fairy bullshit arguments and junk-science of the Religious Right, in use virtually unchanged since the 1970's, was blown clear out of the water by the admission of common sense and reason - which for some strange reason seems to have been made to sit out on the bench until now.
After all, how can you put human rights to a popular vote and call it democracy? How many times do you need to redefine or haggle about the meaning of the word EQUALITY?
"Judge Walker held that the the right to marry for same-sex couples is a fundamental right, the same as for opposite-sex couples. That's revolutionary." It certainly is, especially when the people trying to take away our right to marry make statements about how vital and fundamental a right it is for heterosexuals 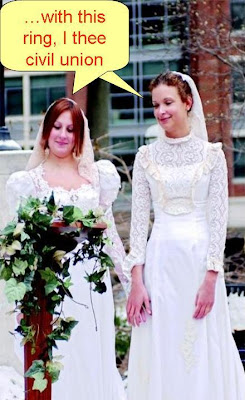 A little while ago I received a response from a priest who wrote to me about the subject of marriage equality in South Africa.
I had said in an interview with Behind the Mask - and he quoted me: "Gay people can marry, but under a separate Act, and also, without a choice of in or out of community of property, and also without the freedom of choice to have a religious ceremony or not - and as Apartheid made us all keenly aware, separate is not equal - but it certainly is separate", Engela said.""
He said: "Of course gays can get married under the Civil Union Act; but surely they have the choice of having an ante nuptial contract drawn up before they get married! They also do have the choice of having a religious wedding ceremony, there are ministers of religion who are marriage officers under the Civil Union Act, I am one of them and I do officiate at same sex religious weddings."
I had of course been quoting a legal expert who had spoken to a community gathering at an ECGLA event in Port Elizabeth several weeks before - at least on the subject of the ANC - no, not Juliaaas - but on the Anti-Nuptial Contract.

Doing The "Told You So" Two-Step

While there are those who are quite happy to take their wedding vows in the dilapidated facilities at the local Home Affairs department, whose tiny wedding chapel (at least in my home town) has only one entrance - which is in the crowded and noisy foyer filled with bored and frustrated people standing in long queues all day (but I have to admit I am not one of them). A wedding is an occasion of personal significance and import, deserving of at least some dignity and respectability. Churches generally ask fees and monies for services rendered, there is no getting away from that - but it seems that no matter how much money you may have available to spend on your wedding - at some churches, if you are gay and want to get married, your money isn't good enough - and it seems, neither are you.

This often causes me to wonder how "Christian", or should I say "Christ-like" some churches really are?

This being the case, in the modern world it is the state which allows all marriage, including same gender marriage - as a civil matter. A religious ceremony is therefore an afterthought which is tagged on to the process afterwards. This in effect defines marriage as a secular affair, regardless of whether the happy couple is religious or not, which religions they subscribe to, or their sexual orientation. Do we not all have to first obtain a marriage license before getting to the church on time?