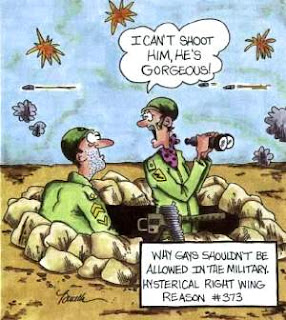 We tend to think that things are better today than they were long ago. After all, we have mobile phones, HDTV, Satellite communication and the internet, among many other things. Of course, not too long ago, we still used to have a more relaxed pace of life, lower stress levels and cleaner air and water - and also a certain level of respect for each other as people.
When we read about the DADT policy of discrimination which has many variants in military forces around the world, I think we are reminded that things were not always this way. Fifty years ago, being different was not always viewed as critically and with such a high level of paranoia and fear as some people see it today. From this we can infer that even today, despite DADT being in force, there are still many gay, lesbian and trans people in military service - even while closeted - they have always been there, and probably even more so.
It would seem to me that diversity is strength, and by having diverse people in your armed forces, we would have made your armies that much stronger. But oh well, your loss.

SAN FRANCISCO — Pentagon statistics obtained by University of California researchers show that women are far more likely than men to be kicked out of the military under the "don't ask, don't tell policy" banning openly gay servicemembers.

Every military branch dismissed a disproportionate number of women in 2008 under the policy banning openly gay servicemembers. But the discrepancy was particularly marked in the Air Force, where women were a majority of those let go under the policy, even though they made up only 20 percent of personnel.

Across the military, women represented about one-third of the 619 people discharged based on sexual orientation. They account for just 15 percent of servicemembers.

The data was released Thursday by the Palm Center at the University of California, Santa Barbara.

With these statistics, it's doubly not surprising that the President considers his plate too full to deal with this, as Lesbian Women are like, one millionTH in line to get equal rights. Even with the tremendous strides the collective Women's Movements have made, when things like this come to the surface, the leader's response seem to be, "yeah sure, we'll get right on that". There seems to be so much yet to be accomplished.

The Ban on Gays and Lesbians in the Military Back in the late 80's, the first woman I ever slept with, a lesbian, told me that she was kicked out of the military for being gay.  I could tell that she was deeply hurt by it - the type of hurt that could have used some professional counseling.  None of it made any sense to me at the time, because I was just a stupid, 20-something that didn't care about those things.  Today, older and wiser, the ban on gays and lesbians in the military still doesn't make any sense to me, even though now I'm familiar with it.

Women in the Military:Separate is not Equal

Are military officials trying to change this?

Women have been officially in the military for more than one hundred years and have been aiding our country in unrecognized military roles for far longer than that.  In the early twentieth century, women were permitted to serve primarily in support services such as the Nurse Corps.  During the 70’s, women were finally allowed to serve on Navy ships as nurses or officers but continued to be barred from sailing on warships or fighting on the “front lines” in combat until the 1990's.