Submitted by Christina Engela on 5 February, 2010 - 09:31
in
With all the celebrations of the 20th anniversary of the release of Nelson Mandela, who became arguably the most important, if not the best President of South Africa - it occurred to me to look at the similarities and differences between this icon and our current Prez.
'Nuff said. 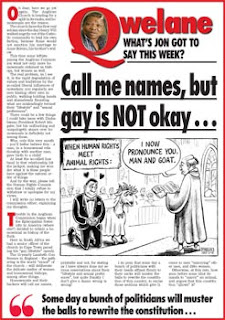 Like others in South Africa over the past few years, I have long been asking the South African government for an explanation for not signing the UN Statement to Decriminalize Homosexuality in 2008 and what they meant when they said they did so on the grounds of "having principles". It seems they have been answering my question in increments.
I got an inkling of what this might mean when our new president, who is on record for making homophobic statements in the media, went on stage in the hall of the Rhema cult and placed gay rights on the bargaining table for right wing religious fundamentalists less than a month before the General Election in 2009.

I must admit I find it disturbing that a man who dodged going to trial to face 180 charges of corruption to become president of SA - and because of the violent behavior, rioting and threats of his supporters, and who opposes gay rights - has been chosen as "best President in Africa", despite only being in the post for 6 months and impressing everyone with his charms, despite having no formal education and having not actually achieved anything since election day.

Well, I suppose that isn't quite the whole truth - he did achieve something - shortly before the general election, he managed to get an invitation to address the religious right wing in the Rhema cult's auditorium, much to the chagrin of other political parties who tried to beat the door down after it was slammed in their faces. Hmm, brownie points scored. Once there, he proceeded to schmooze the conservative fundamentalists with allusions to changing the constitution to make the right wing happy, and invitations to cooperate with the ANC government - which resulted in the formation of the NILC, which is currently adding flesh to the fundamentalist threat to GLBTI equality in South Africa.

Coming back to this "contest", I suppose the rest of the field must have provided slim pickings for the judges, considering the plenitude of banana republics and dictatorships in the rest of Africa. I wonder how Ghadaffi handled the news? He is probably jealous, being that he is the driving power behind the threatening new United States of Africa and arguably the best-dressed dictator in the Pan African Parliament, in his selection of - um, dresses.

In all seriousness, this award indicates to me the sorry state of Africa. It even shames me to say I am South African.

The newly elected president of the UN General Assembly has called homosexuality "unacceptable" for his own personal religious reasons. How could such a man with such a negative anti-human rights bias be elected to such a post with such hefty human rights responsibilities? What does this bode for the future of human rights regarding the UN? How will this effect the many rights battles in the UN for women and the pink community around the world - especially in areas directly affected by human rights abuses specifically directed against the pink community?

It reminds me of the fact that our wonderfully diverse country - which the preamble to the ACDP Facebook groups always remind me of - refused to sign the UN Declaration to Decriminalize Homosexuality last year. Hmm. Apparently they cited having "principles" for not signing. The USA under conservative anti-gay Republican Bush also refused to sign, but changed its mind as soon as the Obama administration came in. We are still eagerly awaiting a South African reconsideration, but I wouldn't suggest anyone hold their breath - especially this bigot who clearly shouldn't be working in such a high UN post - he should be sitting back home in his village, sucking on a hubbly-bubbly surrounded by his harem of slaves, feeling all patriarchal.