Submitted by Christina Engela on 11 March, 2010 - 00:08
in
Have you seen this? Billboards and media coverage all over Johannesburg. Go have a look now - this is what you will see: 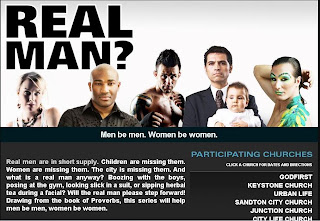 "Men be men. Women be women.
Real men are in short supply. Children are missing them. Women are missing them. The city is missing them. And what is a real man anyway? Boozing with the boys, posing at the gym, looking slick in a suit, or sipping herbal tea during a facial? Will the real man please step forward! Drawing from the book of Proverbs, this series will help men be men, women be women."
The participating churches as listed are:
"GODFIRST
KEYSTONE CHURCH
URBAN LIFE
SANDTON CITY CHURCH
JUNCTION CHURCH
CITY LIFE CHURCH
EASTSIDE CHURCH"
Wow, that's arrogant.
Billboards don't come cheap. And some ass-hat also registered a domain and built a website to promote this horse manure as well. Somebody really, really wants to get this message out there Obviously some churches have way too much money to waste on telling people how to live. What a load of misogynistic, sexist bullshit!
And what is particularly annoying is the inclusion of a transwoman and a drag queen in the picture - showing the stubborn refusal to accept diversity and to accept transgender people as NOT male. That's right, you bunch of ignorant nutters - what the hell else must we cut off before you acknowledge our existence? Presumably, males should all look like the Mr Bean lookalike holding the baby while his wife is away working? Are nannies and day-care centers such a new invention? Is there a Commandment to say "Fathers shalt not help raise their children, nor lift a finger to do things around their partners"? Or is it listed under "Thou shalt get a lowly woman to do it"? Really, just about the only alternatives left open by this insulting poster is the dull gray business suit, short-back-and-sides and a combination of shorts and rugby shirt to cover the boep. Right. Sorry, Rev, but us females like variety - and so do males. And I'm sure that those who fall in-between do as well - and yes, we do exist - ask Caster about that. The gender BInary you cling to so tightly is a FALLACY.
Add to that the following picture that appears on one of the participating churches websites: 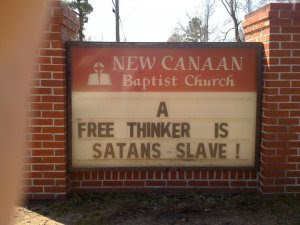 Right. Um. So if you think in any way outside the box - in other words, dare to disagree - or are a free thinker, you are "Satan's slave" - a clever deception intended to equate dissent and free thought with evil and slavery. And yet being a mindless lemming, swallowing volumes of bovine excrement as truth and fact without question - somehow makes you free. There is one thing rather striking to me in that sentiment - the sign above the gates of an infamous Nazi death camp - "Arbeit Makt Frei" (Labor Makes You Free) - look it up.
Back in the old days, when I was in the army, people used to ask how you felt about something and we used to give a popular answer - "I'm a mushroom". On further prompting, we would elaborate by saying: "They keep us in the dark and feed us shit". Is this pattern of blind obedience and acceptance not akin to the doctrine of a vast army of oppression extending control over its minions? Uncomfortably similar, I would say. 'Nuff said.
"By the pricking of my thumbs, something wicked this way comes." - William Shakespeare, (Macbeth). Apparently he was one of ours too.
The Windhoek Lager ad springs to mind, in this case with the big man saying to these fundamentalist embarrassments to their religion: "Churches, always keep it real - remember, I'm watching you."
Epic Fail.
(Posted at Sour Grapes)
5
Your rating: None Average: 5 (1 vote)

It never ceases to amaze me that people could be so very threatened by people who bring into question traditional gender binaries... what's the big freakin' deal anyway? You're right, it's a waste of resources and time. Besides which, it's downright offensive and scary - dictated by fear and always it feels violent to me. Blargh.

Being dragged, kicking and screaming, out of power

I have seen many of these billboards around Jo'burg and, to me, this is a ray of hope and the signals of another generation of free thinkers who threaten to challenge ancient beliefs that have no place in the modern world.

These billboards are being used because of the new generation, my generation, who are more concerned with doing what is right and being themselves than with what a crusty old man wrote about his culture and belief system in an age long gone.
This is a desperate ploy by the church to garner attention due to waning attendance rates and the ever-present guilt trip of "he made his son die for your sins so you better do everything we say" wearing off.

People love provocative. It makes them sit up and pay attention because something interesting might happen. Much like the 'trolls' on the internet-hate-machine, they feed off attention even if it is negative, and so religions will be willing to extreme lengths.

The analogy that comes to my mind is that they are like a bully on a children's playground who is now being ignored and thus, has decided to kick and scream and attack others unfairly to get what he wants.
So just be careful with this article. It may be exactly what they want...