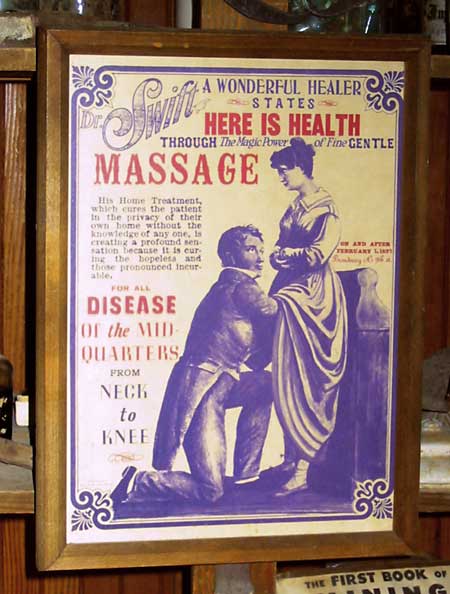 This article was previously published in Brilliant Smut 2001

“Ancient Greeks and Egyptians believed female hysteria (uppityness) was caused by a disgruntled meandering uterus, or hysteria. Hysterectomies were performed to rid hysterical women of their nomadic reproductive organs.”
– from Hysteria, “suffering uterus”

Hysteria has an ancient and notorious history.  It was first diagnosed in ancient Greece.  The term hysteria is a word whose root origins (hystero) entered our language from the Greek word for womb.  Since Hippocrates’ day women were believed to suffer from “womb furie” or “uterine displacement”.  The medical texts explained that the standard treatment was the manipulation of the genitals to orgasm, resulting in contractions and release of fluid from the vagina.

“The ancient Greeks accounted for the instability and mobility of physical symptoms and of attacks of emotional disturbance in women, when these were otherwise unaccountable, by a theory that the womb somehow became transplanted to different positions. This “wandering of the uterus” theory gave the name hysteria (Greek hystera, “uterus”) to disease phenomena characterized by highly emotional behavior. During the Middle Ages hysteria was attributed to demonic possession and to witchcraft, which led to persecution.”1

“There had always been in Western medicine since the time of Hypocrites a belief in this disease called ‘hysteria’, which means womb disease, that was caused by the uterus complaining about neglect. Plato tells us that the uterus is an animal within an animal and that it gets out of control and you have to appease it supposedly. The way that you did this was that you would massage the vulva which was thought to be a part of the uterus – anatomy knowledge was a little thin in these days – and you would produce a crisis of the disease, like the birthing of a fever, it was called the ‘hysterical paroxysm’, and there would be contractions and lubrication and then the woman would feel better for a while.”
– Rachel Maines: from an interview with Phillip Adams on Radio National’s with Rachel Maines, author of The Technology of Orgasm: Hysteria, the Vibrator, and Women’s Sexual Satisfaction

Hysteria became somewhat of a paradox, believed to be caused by a lack of sexual intercourse and/or sexual gratification.  This view was fostered throughout Western history by the medical establishment whose misconceptions had been passed down by the beliefs of the Church, that is, that female sexuality was “the source of all evil”.

“The curse of menstruation, first inflicted upon Eve as a result of her fall from grace, came to be seen as another badge of infamy, born conspicuously by all womankind.”
– Carole Rawcliffe, Medicine & Society In Later Medieval England

According to Albertus Magnus, in his Middle Age work Secrets of Women “women are venomous during the time of their flowers and so very dangerous that they poison beasts with their glance and little children in their cots, sully and stain mirrors, and on some occasions those men who lie with them in carnal intercourse are made leprous.”

These horrible inaccuracies lead to the medical belief that the uterus was responsible for numerous diseases and aberrant behaviors. Towards the end of the nineteenth century, this attitude climaxed in an epidemic of “hysteria” among white, middle-classed women.  According to one seventeenth-century physician, hysteria was “the most common of all diseases except fevers,” and became the most diagnosed disease in history.  In Lydia E. Pinkman’s textbook, the symptoms are discussed in detail:

“Hysteria is beyond question the most puzzling ailments with which medical science has to deal and at the same time one which its unhappy victim is the least likely to obtain a due sympathy…  The ailment usually affects young women from 15 to 30… with whom the condition of the womb is almost invariably responsible. Luxury, overwork in school, anxiety, shock, unhappy marriage, and grief, may be other causes…”

The symptoms also included “a feeling as if a lump in the throat, and attacks of laughter; violent beating of the heart; the muscles of the limbs are thrown into spasms; the breathing is irregular; the cheeks flushed; and the neck is swollen… Complaint is made of a pain that does not exist… the breast and abdomen may be extremely tender…”

Women were considered fragile nervous wrecks.  Passionate women or those sexually voracious were most vulnerable to the disorder.  Patients suffering from hysteria would become extremely agitated, prone to fainting spells, would twist the body into violent contortions and throw their limbs about in convulsions.

“Unfortunately for the doctors, they also considered the maternal organ to be so potent in affecting behavior that women might be carried away in any number of passions. So while it was understood that sexual feelings were “unwomanly” or “pathological” women were still subject to the overwhelming control of their uteri, and occasionally had their free wills usurped by the fertile tissues. To check for this “problem”, doctors would fondle the privies, watching carefully for a reaction yet ready to defend themselves lest they awaken the wild, passionate, uncontrollable succubus within…”
–Barbara Ehrenreich and Deirdre English, ‘Complaints and Disorders: The Sexual Politics of Sickness’

In Charlotte Perkins Gilman novel, ‘The Yellow Wallpaper’, originally published in 1899, the author portrays the internal dialogue of a woman diagnosed with hysteria.  I remember reading this many years ago and finding it incredibly haunting.  The protagonist is prescribed bedrest and slowly goes mad from the isolation.  Forbidden the excitement of intellectual pursuits, she becomes obsessed and begins to have delusions of a woman creeping through the yellowed wallpaper.

“There are things in that paper that nobody knows but me, or ever will.  Behind that outside pattern the dim shapes get clearer every day.  It is always the same shape, only very numerous. And it is like a woman stooping down and creeping about behind that pattern. I don’t like it a bit.”
–Charlotte Perkins Gilman, ‘The Yellow Wallpaper’

Gilman was a prominent social critic and feminist writer in the United States in her time, penning theses on social issues including Women and Economics (1898), and a feminist utopian novel, Herland (1915). ‘The Yellow Wallpaper’, although a work of fiction, is based upon her own experience with hysteria.  It critiques the role of women in Western society during her time which includes bedrest and other forms of control, wielded to keep women in their social position.  Down, girl, down.  But, bedrest was the least of their concerns.  Other treatments described by historian Carrol Smith-Rosenberg, as quoted by Ehrenreich and English were much more brutal:

“…doctors recommended suffocating hysterical women until their fits stopped, beating them across the face and body with wet towels, and embarrassing them in front of family and friends.”

Additional medical interventions were just as drastic including binding the body, purging, bloodletting, and in worst cases, hysterectomy and/or clitoridectomy. Western culture justified the removal of various female organs, particularly the uterus, because they were believed to be the root of female “hysteria”.  Dr Isaac Baker Brown “advocated clitoridectomy to eradicate this evil and performed the operation at his London Surgical Home.”2 The women of the Victoria period were not suffering from hysteria, but from medical barbarism. 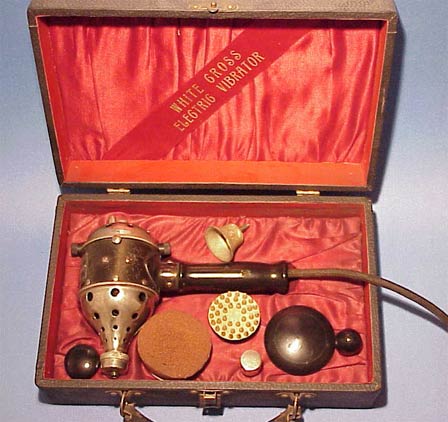 Luckily for women, the treatment of hysteria evolved from the sinister, to a kinder, gentler “cure”.

Physicians came to believe that the main cause of hysteria was sexual deprivation.  The treatment then evolved to a genital massage until the woman had “hysterical paroxysm” (orgasm).

“When these symptoms indicate, we think it necessary to ask a midwife to assist, so that she can massage the genitalia with one finger inside, using oil of lilies, musk root, crocus or something similar. And in this way the afflicted woman can be aroused by a paroxysm (orgasm).”
– Pieter van Foreest, physician describing “womb disease” 1653.

One doctor from Renaissance medical annals even waxed poetically upon the pleasurable remedy for hysteria:

“Those who are free’d from the fit of the suffocation of the womb either by nature or by art, in a short time the color commeth to their faces by little and little, and the whole beginneth to wax strong, and the teeth that were set, and closed fast together, begin (the jaws being loosed) to open and unclose again, and lastly som moisture floweth from the secret parts with a certain tickling pleasure… and… the womb being before as it were rageing, is restored unto its own proper nature and place, and little by little all symptoms vanish away.”

By 1900, a wide selection of electro-mechanical vibrating devices became available. Vibrators came in all shapes, sizes, and functions ranging from those powered by hand, foot or air pressure, water turbines, gas engines, batteries and street current through lamp socket plugs. “There were musical vibrators, counterweighted vibrators, vibratory forks, undulating wire coils called vibratiles, vibrators that hung from the ceiling, vibrators attached to tables, floor models on rollers and portable devices that fit in the palm of the hand.”4

“Women are much more liable to hysteria than men.”
– Oxford English Dictionary.

Vibrators were also replaced by psychoanalysis by the 1920s. Hysteria evolved from the late 17th century disease of the female reproductive organs to a moral disorder of the nervous system (hysterical neurosis or somatoform disorder).  Its transformation from a physical disorder to a mental one was institutionalized by Sigmund Freud, a Viennese psychoanalyst who researched case histories in Studies in Hysteria.  Freud suggested that women were “inherently hysterical, overly emotional, and volatile…” a belief that still plagues contemporary women to this day.  He concluded that women “wanted” for a penis and were essentially lacking, a problem traditionally described by the term “penis envy” and linked to “hysteria”.

“At the end of the 19th century, however, the French neurologist Jean Martin Charcot demonstrated that morbid ideas could produce physical manifestations. Subsequently his pupil, the French psychologist Pierre Janet, formulated a description of hysteria as a psychological disorder. Later Sigmund Freud began to develop the theory that hysterical symptoms are the result of conflict between the social and ethical standards of an individual and an unsuccessfully repressed wish.”
– “Hysteria,” Copyright © 1994 Microsoft Corporation. Copyright © 1994 Funk & Wagnall’s Corporation.

The disorder was one of “imaginary sensations”, such as those suffering from “mania”, somnambulism (sleepwalking) and amnesia.  The subject’s emotional excitability was believed to be highly exaggerated and their ability to control their actions much diminished.  It was characterized by the patient losing control over the emotions, often falling into convulsions or fits (paroxysms).   Multiple Sclerosis or “Creeping Paralysis” as it was then referred to, was one of the many diseases considered to be a mental condition caused by “Female Hysteria”.  Hypochondriasis, or the irrational fear of obtaining a fatal disease is another somatoform disorder.

“The so-called somatoform disorders are characterized by physical symptoms for which no physical cause is evident. In hysteria, complaints are presented dramatically, if vaguely, usually beginning during the teen years and continuing through adult life. Women are much more frequently affected than men. The rare conversion disorders (hysterical neurosis) commonly mimic a neurological disease such as paralysis. ”
–”Mental Disorders,” Microsoft (R) Encarta. Copyright © 1994 Microsoft Corporation. Copyright © 1994 Funk & Wagnall’s Corporation.

All of the “symptoms” of clinical “hysteria” have become obsolete, under other psychiatric classifications and personality disorders.  Hysteria was not officially removed by the American Psychiatric Association as a disease until 1952.  However, up until at least 1967, Psychiatrists were still treating “hysteria” as a disorder linked to female sexuality and “genital fixation”.–Sexuality in Females with “Hysteria”- http://ajp.psychiatryonline.org/cgi/content/abstract/124/5/687