He quotes "Rob" and "Michelle", F2M crossdreamers, on the use of strap-ons:

"When I put it on, it's my c*ck," says Rob. "I masturbate with it - I'm lucky in that I can come from the friction - and I have sex with it. I've trained myself to transpose the sensation in my head - the rhythmic pressure of the harness against my cl*t becoming the friction of my c*ck against my hand or someone's enclosing flesh - and when it's on me, I can forget about the rest of my body."
"Michelle concurs: "Since my strap-on is double-headed, I can usually make myself c*m by jerking it off, as if I were a man, and as if it were my own. I love for a man to wear lingerie; it makes it feel more fulfilling to my role. He is the woman, I'm the man. Also, 'taking' a man, or simply just caressing him in a more dominant position, makes me feel more masculine. And nothing makes me feel more like a man than to have him suck on my strap-on."
The fact that many F2M crossdreamers have fantasies based on stereotypical gender roles should not come as a surprise. In this respect they are not different from M2F crossdreamers nor from most cisgendered people for that matter. They use the symbols and the language of their culture to express their inner masculinity.
Kaldera says that a large number of female crossdreamers live in denial, and that many lesbians deny their existence, simply because women are not supposed to have such feelings.
Indeed, he finds the same arguments here as I have found in the M2F transgender debate. There are even F2M transmen who argue that F2M crossdreamers should not be allowed to transition if they get turned on by imagining themselves as men!
"The background for this argument is," Kaldera says, "fifty years of assumptions by sexual researchers that women don't have the kind of nasty, humiliating, ridiculous-looking sexual fetishes that men do."
Almost homosexual
I have found one scientific study on girlfags. It is written by the German researcher Uli Meyer: "Almost homosexual". She also uses the term "transfag", which refers to a F2M transman who is attracted to men. 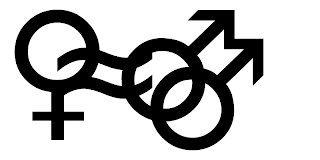 Image: Girlfag logo designed by mooglefan
My German is very rusty, but from what I see, she makes several interesting points, one being that the girlfag falls between all types of chairs: for the transculture she is not man enough, not woman enough, not gay enough, not trans enough.
Nor does she have the symbols the M2F crossdresser has available to express her identity. Crossdressing does not have the effect it has with M2F crossdreamers, as women may use male clothes without outing themselves. This means that they are read and understood as "normal" ciswomen. They are invisible, which is another explanation for why there is so little research on them.
Meyer does name a few well known transfag artists and thinkers, though, including Lady Caroline Lamb, George Sand, Sarah Grand, Carrington, Carson McCullers and more. She also mentions Lou Sullivan, the founder of FTM International, an international organisation of tranmen, as coming out as a gay man.
Yahoo poll
Furthermore, she refers to a study of the Yahoo girlfag group.
115 of the members of this group identified as girlfags. Of these 29 called themselves heterosexual, 80 bisexual, 3 lesbians, 48 genderqueer, and 33 as not genderqueer.
Confused? Well, the poll clearly reflects a lack of clarity both as regards terminology and what it means to be a girlfag. This is to be expected when a group try to find its identity in this way.
But surely, these are exceptions to the rule, right?
Whenever I bring up the existence of F2M crossdreamers, the most common argument is that a few examples like this do not amount to anything. Women are different from men - read: only men can be "perverts".
To me the F2M crossdreamers are the black swans of transgender research. Even if there should turn out to be fewer of them than of M2F crossdreamers, their very existence proves that the general idea that only men can be sexually aroused of the idea of having the body of the opposite sex is wrong. That means that crossdreaming and crossdressing cannot be understood as the result of the peculiarities of the male psyche.
Kaldera again:
"Personally, I think that the image of women as being the keepers of moral purity (which generally always means that they are not allowed to be sexual, or at least not sexual to the degree and in the ways that men are) has got to go. First of all, it's not accurate, given the growing number of female-bodied people who are coming out of the closet about how wet they get over playing with male personas in bed. To deny that this is part of the female sexual demographic, even if it's a minority part, is to devalue and invalidate their experience. It's not worth doing just so that certain other women can feel morally superior to the men that they currently happen to be berating for being disgusting perverts."
My guess is that there are as many female crossdreamers as there are male ones.  Since I started writing about "autoandrophilia" over at my blog I have gotten quite a few comments from biological women who get turned on by imagining themselves as men.
Now that we have found female to male crossdreamers, is the world ready to accept that crossdreaming and crossdressing are natural expressions of human sexuality? I am afraid not. The controversy regarding the DSM manual did lead to the authorities abandon the absurd notion of having a paraphilia that was male only (autogynephilia). A few months ago the experts therefore decided to add "autoandrophilia" to the psychiatric manual.
Congratulations, my dear F2M sisters/brothers, you are now considered perverts as well!
5
Your rating: None Average: 5 (1 vote)

Hm, yes...I think there is an interesting variety to this culture.  Depending on who I'm talking to, I identify as lesbian, bisexual, or queer because I feel all apply.  I think of it as liking the female spirit no matter the body; I do not like transmen, butch types or men, but women or transwomen are super ok (androygenous is my fav).

But at the same time, it's not so much a want to be dominant in a relationship as wanting to be...equals?  I get the sense that people with "masculine" traits still tend to like dominating conversations and bedroom play, and I don't want someone dominating me.  I want us to alternate wearing cocks, yes?