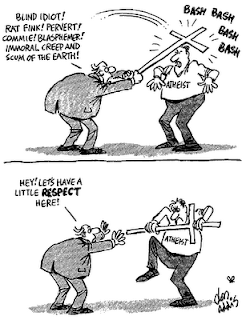 According to BBC news,

According to BBC news, Hindus now want to reclaim the use of one of their traditional symbols - the swastika. Why on Earth they would want to do this, I have no idea

... Because it was their symbol first and it was the Nazi's who co-opted it?  I'm not sure that skinheads and neonazis get to keep an ancient symbol that have been used by dozens of cultures for thousands of years.  Yes you're right that the symbol won't be easily reclaimed and that for some it will always be equal to genocide.  But you're acquiescing to that power if you're unwilling to allow those who first created the symbol (and for noble purposes) to continue using it themselves.
The swastika question is completely different than your later examples of Christians or Muslims continuing to use their own symbols after they themselves caused their meaning to be associated with oppression and intolerance.
Finally, isn't there room for an understanding that the cross and the crescent don't have homogeneous meanings within their own faiths?  This is true of all kinds of symbols.  Think of the American flag and how it means different things to different Americans.  How protesters have thrown the flag's meaning on its head by using it to QUESTION the notion of freedom? Symbols have power, which is in no small part due to their ambiguity and availability to be appropriated, reclaimed, and f****ed with.  Rather than close down their meanings, we should encourage this kind of expansion.
Submitted by Lisa J. (not verified) on 12 July, 2010 - 13:29.

Lisa, Well, if my


Well, if my religious or cultural symbol was used to symbolize the murder of 6 or more million people and a violent conflict that destroyed half a continent, and millions more lives - I certainly wouldn't want to be associated with it again. Would you?

Leave it to the skinheads and wanabe murderers - they have claimed it and defiled it in such a way that it could never be reclaimed. Like the cross and the crescent, or the bible and the koran, or any symbol that has been used to wage a war or commit crimes against humanity - you could never wash all the blood stains out of them and make them clean and new and meaning something else. Not unless the human race forgot its past, or the road it has traveled.

Following your expansion on symbols meaning all kinds of things to different people, perhaps it shows that one day we will get to a time and place where nothing will mean anything anymore? That is rapidly becoming the case with me ;)