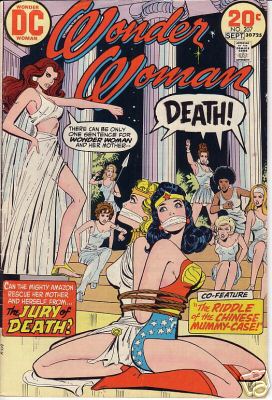 Last week on PopMyCherryReview I explored the History of Bondage in Mass Media with a brief look at the roots of bondage in Japan, then onto Western Culture.  I investigated imagery from John Willie, Bettie Page and Irving Klaw, Pulp Fiction Detective magazines, silent films and seductive celluloid, then retro TV and onto contemporary TV and films.

Today I’m going to back up a bit and explore bondage in female super heroes (mainly Wonder Woman) via pulp fiction comics, TV shows and films.

Wonder Woman was the first real female super hero to be created.  And, like the many who followed in her footsteps, she was an emancipated woman (she appeared on the cover of Ms. Magazine and was a feminist icon) who fought against the “bondage” (both real and literal) of women by patriarchy.  Unlike the strong and negative archetypes of the femmes fatales of the 30s and 40s who were sexual objects of male desire that paid for their independence often with death, Wonder Woman and her predecessors fought man’s continuing efforts to keep them enslaved.

Ah, Wonder Woman.  I can remember growing up and watching the TV show Wonder Woman and thinking how hot Linda Carter was.  Buxom, brunette, with bullet reflecting bracelets, a boomerang tiara and a skimpy swim-suit style costume, I adored her.  Unfortunately, Wonder Woman had a bad reaction to chloroform and ended up getting herself into bondage a lot.

Wonder Woman was created by Dr. William Moulton Marston for DC Comics in 1941 and has been continuously published by DC Comics ever since.  She is a superherione Amazon Princess who belongs to the ancient warrior race of Amazons and Marston modeled her as a “distinctly feminist role model whose mission was to bring the Amazon ideals of love, peace, and sexual equality to ‘a world torn by the hatred of men…’  Marston wanted to create a positive role model for girls that would serve as a counter to the high level of violence and the “blood curdling masculinity” he felt pervaded superhero stories… [in which] women were typically portrayed as helpless and in need of rescuing, or as sexy, buxom pin-ups models, often in provocative bondage poses.”—The Legacy of Wonder Woman

Among some of her amazing powers were super strength, speed, stamina, the ability to fly and she was also skilled in hand-to hand combat being an Amazon Warrior and all (obs!).  Despite her strength and wondrous powers, she did have one deadly weakness: “if her bracelets are bound together by a man, she loses her powers.  In countless stories, she is chained and bound by male villains, only to break free and triumph. The ropes and chains are symbols of patriarchy and the drama is her ability to break the shackles of male domination they symbolize. Unfortunately, most comic historians have ignored the feminist elements of the series, and focused on these elements of bondage, reducing the complexity of Marston’s Wonder Woman mythos to little more than a thinly disguised sadomasochistic sexual fantasy.”—The Legacy of Wonder Woman

One “source” suggests that her tribe was enslaved by Hercules who seduced their Queen into removing her invincibly girdle, and once rescued by Artemis, where forced to wear their metal bracelets to remind them of their enslavement to man.

Whether symbolic or not, bondage became a big theme in the pulp comics of Wonder Woman and she fueled people’s fantasies of bound damsels, as well as fantasies of Amazon women, and emancipation after suffrage.  Oddly enough, the Amazons also practiced bondage on other women on Transformation Island (a small island near the Paradise Island—Wonder Woman’s home—which served as a rehabilitation facility for reforming criminals).  There was also a dominant/submissive lesbian mythos to Wonder Woman’s character that was scarcely hidden in the island’s training methods.  Wonder Woman thus ironically became the very epitome of the buxom damsel in distress in bondage and perpetrator of those acts on other buxom villains that Marston supposedly was trying to reform. 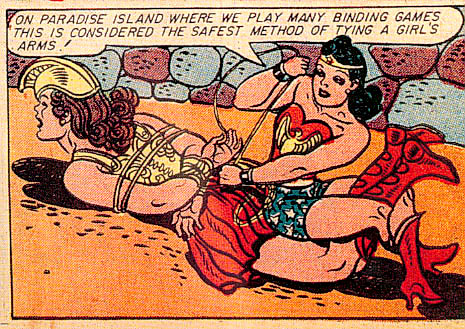 So Wonder Woman is an incredibly complex dichotomy who went on to inspire many similar heroines, some with super abilities and others who were super sleuths, all of whom ended up in bondage at some point.  These include Emma Peel from the Avengers, 99 from Get Smart, Charlie’s Angels, the Bionic Woman, Lois from the Adventures of Lois and Clarke, Buffy the Vampire Slayer and of course Xena: Warrior Princess, who is perhaps a modern remake of the iconic Wonder Woman character.

Do you think Wonder Woman was an emancipated character as her creator Marston had hoped, or is she only a thinly veiled reason to put “strong” women in bondage during the 40s and 50s, which may have been symbolic about American patriarchal views and attempts to control women?  Some "sources" also suggest that Marston was into kink and bondage himself, which in fact inspired the bondage in the Wonder Woman series.  What do you think?  Is SHE emanicpated like the 30s Femme fatale, or simply a (fe)male sexual fantasy, or both?

I must first admit that Wonder Woman was not one of my comics.  I didn't like DC much, really until way into my adulthood when Frank Miller's The Dark Knight came out.  I was much more of a Marvel fan.

Looking at this topic now, I definitely see what you're talking about.  There is this line that divides the question.  On one side, the character herself and on the other, the observer / reader.  If a woman wearing form fitting clothes is wrestling with ropes, bondage and other people, there is her experience and her values as well as the experience and values of the viewer.

In Wonder Woman's case, she's a drawing and therefore incabable of any mind, life or agency.  Everything she does or is depicted as doing is the fantasy of someone else.  In some regard then, the author's intentions and values stand in her place.  This is difficult as direct substitute because the artist is a man.  This drawn woman is - by definition, a fantasy of a man.  Maybe he's projecting his female side into her and maybe not.  There may be some of that, but without him identifying in his personal life as a woman - it sure seems unlikely.  So, at best the artist is standing in for a woman's point of view to whatever degree he is capable of doing.  It's not that men are bad in this just because they're men.  Put gender aside and show me another person that can tell you what life is like for any other person of any gender.  Really, we only know about our own selves, wants and lives.  That's it.

So, there is no way to have Wonder Woman speak up for herself and let us know if she feels objectified, denigrated, empowered or expressed.

On the other side, we have the viewers / readers.  We think what we want to about Wonder Woman and don't have to ask her how she really feels.  We can call her a feminist or a male fuck-toy fantasy and we can do so without ever asking her how she really feels.  Whoever Wonder Woman is to us, she's a product of our imagination, through and through.  For sexists and misogynists, she's no different than a blow-up doll or a doodle of tits and pussy, drawn in the margins of a notebook.  For feminists and egalitarians, she's a pretty, shiny poster of the good we see in women.  There are a zillion opinions that can be formed about Wonder Woman (or any other fictional character) and none of them are the truth.

Fantasy is fantasy and all fantasies tell the truth about one thing - the person imagining them.